What Are the Best Trees for Firewood?

It has been said that building the ideal fire starts with using the proper firewood. There are thousands of species of trees known to be in existence, and while every tree that grows taller from a single trunk or stem is referred to as a woody perennial, each one has its own unique traits. Because of this, there are some that are among the best trees for firewood. Thus, it would be a good idea for you to learn from experts like those at Mr. Tree which trees are the best for firewood if you’re planning on using firewood anytime in the near future.

Green firewood is too moist to burn in an efficient manner, which means you’ll have to deal with low heat, a whole lot of smoke, and much difficulty when it comes to actually lighting the wood. The best way to avoid these issues is to stick to burning seasoned firewood with a low amount of moisture, because dry wood is always much easier to keep lit.

Here are five trees we recommend:

Whether you choose one of these or any other type of firewood, you must keep in mind that seasoned dry firewood burns far better than unseasoned green firewood. Purchasing your firewood from a reputable seller is the best way to ensure the wood you buy is ready to burn.

Let’s take a closer look at our favorite woods. 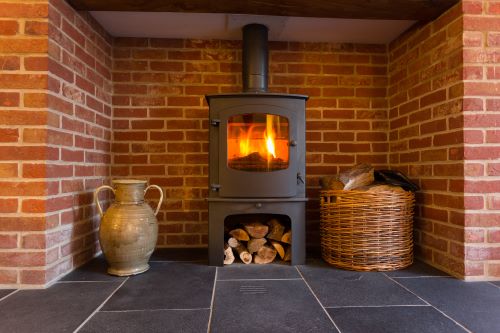 Hickory trees are among the very best trees for firewood. The USDA has said that even though there are stronger types of wood than hickory, it provides a rare blend of strength, hardness, and stiffness that no other commercially available wood can offer. This is the reason hickory is very often the wood of choice for those making the most expensive furniture. It’s also useful for certain wood-based products that other types of wood can’t be used for.

Amazingly, hickory retains these qualities when it comes to making first-rate firewood. Hickory firewood produces fire that’s not only red hot, but also beautifully bright and incredibly clean. The great thing about hickory is that beyond just heat, it’s highly efficient when used for cooking, especially various kinds of meat. You can barbecue with hickory because it has a fantastically high level of energy that keeps the flame from going out in the middle of cooking, and the smoke generated while the hickory burns provides a unique flavor that many prefer to other methods of smoking meats.

Maple is usually harvested for the sole purpose of being used as firewood. It’s a hardwood that has over 100 known species and can grow as high as 150 feet tall. While it’s ideally suited for firewood, one issue with maple is that it is expensive if used in the United States because it is predominantly grown in Asia, meaning those who wish to use it in the United States have to pay the cost of importing it.

Depending on the particular country you’re importing from, it could end up making the wood far more expensive than some of your other common firewood options. That said, if money isn’t an issue, maple is arguably the best pure firewood you can get since it doesn’t emit a lot of smoke, it smells nice, and it burns very hot. Maple is excellent for cooking because, in addition to not bothering anybody with a lot of smoke or a bad smell, it adds a flavor that is mildly sweet, which doesn’t overpower the meat, but does add a pleasant extra taste to it.

Oak is known largely for producing acorns, but it’s actually one of the most popular types of firewood, in no small part because of how easy it is to get. Unlike maple, which is expensive due to the need to import it, the primary producer of oak is North America, so it’s available in abundance in the United States. Close to 100 species of oak are grown domestically. This applies evenly across the country, as the East Coast, West Coast, Midwest, and south all grow plenty of oak.

Whenever any kind of product is that plentiful, it drives down the market price dramatically, which is the case with oak, and it’s why it’s the perfect firewood if you’re dealing with a strict budget. Oak is a hardwood that’s well-suited to a fireplace or stove because hardwood burns very hot. It’s also easy to light because it has a high density, which allows it to burn longer and hotter than softwoods.

The reddish color of cherry wood has made it a very popular choice for building furniture, but it’s also an excellent source of firewood. As is the case with other hardwoods, cherry can be used in a wide variety of ways and can be lit easily, sometimes using nothing more than a simple match. The benefits of that cannot be overstated, especially when dealing with cold temperatures, because when it is freezing cold, nobody wants to be stuck having to spend a lot of time struggling to light firewood.

Cherry wood is a common selection for homeowners looking to use their fireplace to produce heat in the cold winter months, as it can sustain a burning fire for a considerably long period of time while producing moderate to high levels of heat.

Black locust isn’t as well-known as cherry, maple, oak, or hickory, but it still makes excellent firewood. That said, it’s much harder to come by than a more commonly used firewood like oak, largely due to the fact that it typically only grows in a limited number of states throughout the Appalachian Mountains, as well as Missouri and Arkansas.

However, while less common than many other types of firewood, black locust produces a powerful and durable dense wood that’s quite often used to make fence posts. That same durability, strength, and density that makes black locust perfect for producing fence posts also make it a terrific choice for firewood.

← What To Do When a Tree Falls on Your House What Kind of Tree Service Uses a Crane? →