When your area is plagued by flooding there are a lot of potential hazards for homeowners to worry about. For some, water can accumulate inside the home, especially if there’s superstorm like flooding, but did you know that flooding also causes stress on your trees? It certainly does, and if you want to consult on the matter, you can contact a tree service Portland professional to properly manage your tree care after a major storm.

According to Northeastern Area State and Private Forestry (NASPF), different studies on the impact of flooding on trees have come back contradictory to one another, so people have to be careful with generalizing. Each case is different, and there are many variables to be considered.

First, let’s start with the storm’s effect on the soil. Flooding results in poor soil aeration because the supply of oxygen to flooded soil is extremely limited. According to NASPF, “The rate of decomposition of organic matter in flooded soil tends to be only half that in an unflooded soil.” Other impacts of flooding include speedier decay of roots and seedling-aged trees may even die due to being pushed over, buried in mud, or uprooted by the force of the water. Note also that flooding during the growing season has the potential to do more damage to trees than if the trees are in a dormant stage. 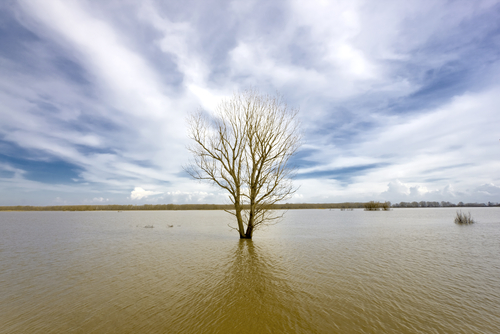 There may also be significant insect damage to trees after flooding. According to studies done by the University of Minnesota, stem boring insects are the insects you need to concern yourself with. These include beetles and wood wasp larvae.

Here’s more from this study. According to the report, “Wood borers may spend some time in the phloem layer, but generally tunnel deeper and feed in the wood of tree stems or branches.“This tunneling is not usually a serious impediment to tree survival, but it can significantly reduce the quality of any eventual wood products. Wood borers, however, weaken stems, which may lead to breakage during ice, wind or snow storms.”

The trees most commonly susceptible to insect damage during stressful periods include pines, oaks, hybrid poplars, birches, and hickories. To reduce damage from stem borers, prevent additional wounding or root damage. You should also sanitize areas by removing broken limbs and dead trees. You’d probably be best using a tree service Portland professional for a job like that. You can also increase tree vigor through light fertilization or watering if soil conditions become excessively dry after flooding.

Dr. Kim Coder of Extension Forest Resources released a report on the effect of flooding on trees, and she specifically touched on reduced chemical activity, stating, “flooding reduces redox potential, increases pH of acid soils, and decreases the breakdown of organic matter. The breakdown or decomposition of organic matter in normal soils helps hold cations and anions, releases essential elements, and prevents leaching of elements.“

Tree Maintenance Limited explains the process of what happens when the soil and tree become waterlogged following a flood. First, the water replaces the available air, starving the roots of vital oxygen. This leads to the death of fine root hairs, which ultimately limits the tree’s ability to take up water and nutrients once water levels have fallen. The lack of oxygen leads to the buildup of harmful gasses, which often times lead to the death of larger roots. That could compromise the tree’s stability over a length of time.

“The soil structure starts to deteriorate, clay particles loose their stickiness, reducing its ability to grip the tree’s roots,” according to Tree Maintenance. “This, along with the loss of root mass, leaves the tree more liable to failure at the root plate. Saturated soils become more prone to compaction damage which can occur to a greater depth.”

There are several signs to look for to know when your tree is stressed after severe flooding. Specifically, if new leaves are considerably smaller than they usually are during growth, that’s an indicator. Also, yellowing of the leaves, defoliation, or an early autumn color change, followed by leaf fall, could be all be signs.

Now, the following question usually arises: if I have a flood-impacted tree, what could I do to treat it? This is obviously pivotal. The steps you make next could determine whether the tree in question ultimately lives or dies. If the tree is going to be sick, it may be best just to remove it, both for the tree’s sake and for aesthetic purposes. Sick and dying trees aren’t exactly visually pleasing to look at, and they’re limited in what benefits they provide the environment.

First, you should remove any sand or silt build-up or you could cover exposed roots with good-quality topsoil. You then want to call a tree service Portland professional to improve the soil structure and drainage. This may cost a few bucks, but it requires heavy machinery to do the job effectively. Next, you need to incorporate organic composted material into the upper layer of the soil to improve structure, but be careful not to damage any roots.You should avoid adding fertilizer unless there is a need for a particular element the fertilizer possesses, which is rare. Ultimately, the fight to bring a damaged tree back to health could take years, and it’s not always successful. As stated earlier, every case is different and presents unique challenges.

Ultimately, if you have a flood, it’s probably best to call a tree service Portland professional to come and assess the situation. They’re used to doing work like this, so they can use prior experience to make an educated diagnosis on what the future holds for your flood-damaged tree.

If you are committed to saving a tree, you can also get multiple opinions, but note that some companies charge for an estimate. Doing the legwork and reaching out to the appropriate professionals ultimately ensures that the best decision will be made in the end, both for you and for your tree.

We have served the Portland metro area and all surrounding communities since 2000, with over 30 years of experience in residential and commercial tree care. We offer the highest quality work for you with a wide range of services. Call us today for your free estimate! We are an OHSA Approved, Drug Free Workplace. We are licensed bonded and insured for your protection and your neighbors
Contact Us
Call Us